« Back to Rhuddlan Soldiers WW1

Richard Humphrey Williams was born in 1886 in Denbigh, the eldest child of David and Lucy Williams. At the time of the 1891 Census, the family were living at 6 Lon Bach. Apart from Richard there was a daughter Janie. His Father’s employment was recorded as General Labourer and the family spoke both Welsh & English.

The 1901 Census records the family now living at 12 Entry Fawr, Post Office Lane, Denbigh. Janie no longer appears on the census, but the family has expanded to include 8 year old Mary, 3 year old Robert and 2 year old Lizzie. Richards Father’s employment is now recorded as Osler/Footman.

During the December quarter of 1908, Richard married 19 year old Ellen Corey of Rhuddlan [Nellie on marriage records] in a civil ceremony at St Asaph. [Free BMD]. The 1911 census records the couple living at 12 Parliament Street, Rhuddlan, with their 1 year old son William David. Richard’s sister Mary is recorded as lodging with them. Richard’s employment is given as “Jobbing Gardener”. Tragically their young son, William David died the following year, aged 2 years. [Rhuddlan in Peace & War]

On the 4th September 1914, Richard enlisted in the Denbighshire Yeomanry, and completed Army Form B.2065 [Short Service Attestation Form– Ancestry]. On the 9th December 1914, Richard was thrown from his horse at Aston Park, Wrexham. He suffered serious injury to his kidneys. A subsequent court of enquiry on 17th March 1915, adjudged that the accident occurred through no fault of his own, whilst undertaking ordinary military service [Ancestry].

The notes of the medical board of the 24th June 1915 [Ancestry], confirmed the injuries to his kidneys. It also noted the continuing weakness of his back and legs, recorded that his gait was uncoordinated with exaggerated jerking of the knees, and that he was afflicted by psoriasis. Consequently Richard was discharged from the service on 2nd July 1915, with a pension and child allowance for his two children.

There is a Flintshire War Memorial Record Card for Richard at the Flintshire Records Office, Hawarden.

Richard’s entitlement to wear the Silver War Badge [no. 99825] due to his medical discharge, was confirmed on 9th December 1916. [Roll of individuals entitled to War Badge –Ancestry] The Silver War Badge was issued in the United Kingdom and the British Empire to service personnel who had been honourably discharged due to wounds or sickness from military service in World War I [Wikipedia]. 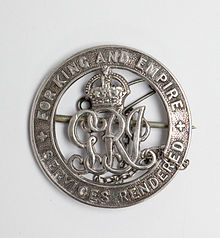 The Denbighshire Yeomanry mobilised at Wrexham on 4th August 1914, as part of the Welsh Border Mounted Brigade. It became a dismounted unit in November 1915, moved to Egypt and eventually became the 24th {Denbighshire Yeomanry} Battalion, The Royal Welch Fusiliers. [The Long, Long Trail]

Richard died on the 2nd November 1918 and was buried in St Margaret’s Churchyard [The Marble Church] on the 5th. His grave is marked by a military headstone.

He is commemorated also  on St Mary’s Church Scroll of Honour & Stained Glass Window, the Royal British Legion’s Roll of Honour [inside the Community Centre], and the North Wales Memorial Arch at Bangor.

His widow Ellen, subsequently married William Randles during the September quarter 1919 [Free BMD]. Tragedy was to further visit Ellen and now her new Husband, as their son L/Cpl. Charles Richardson Randles was killed in WW2 on the 25thFebruary 1945. He is buried in Taukkyan War Cemetery, Burma.

There is no Commonwealth War Grave Certificate for Richard.

I am indebted to Sarah Hodnett of Rhuddlan Local History Society, for her assistance in compiling this record.

Learn more about the other soldiers on the Rhuddlan Memorial